***This review was written by community member @Zakman ***

I got an opportunity to review Zyxel GS1350-6HP network switch. It is the smallest switch of the ZyXel GS1350 series. This series is specifically designed for video surveillance systems, and Zyxel says that it can connect cameras at a distance of up to 250 meters.

The switch has modern architecture with things like LAG, VLANs, IGMP and port mirroring. It has typical Zyxel WebUI and also Telnet connection. If one has previously used Zyxel’s switches this one has the same UI with some minor additions related to long distances of LAN connection, or as they put it in their slides ”specialized hardware and software features dedicated to surveillance deployments and applications”. In the software there is a Auto Camera Recovery function, which allows you to reboot the camera power if it is not working properly with continuous power supply to the camera even if you restart the switch for upgrade or maintenance purposes. There should also be support for Nebula cloud management system but I could not get it working yet. I will test it later when I get the switch connected to the cloud service. I could not find possibility for Nebula server local installation to Linux/Windows systems. It would be great that the whole system would be hosted and administered totally locally with modern GUI without internet connection. There are security systems which clients what to keep absolutely private for security reasons.

The package includes similar items to other Zyxel smaller PoE-versions (sorry about the bad enlightment of the picture below). The power supply is rather large almost the same size of the switch itself. Power supply is not integrated to the switch because this is passive cooled device. 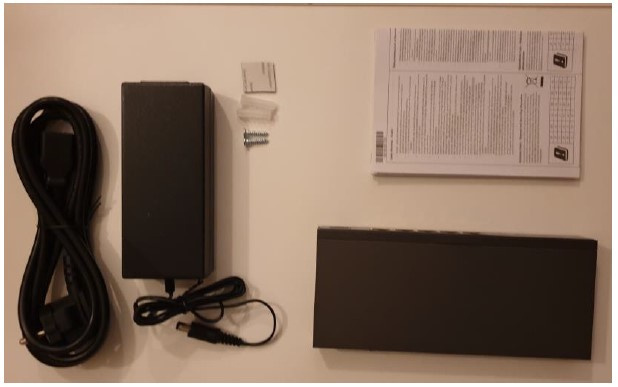 Because this is a warranty valid device I did not open the case to check the components and therefore I cannot estimate the quality electronics. But based on prior experience of Zyxel switches they use excellent capacitors and other electric components in their switches.

The switch is passive cooled and after weeks of non-stop operation case temperature is pretty cool. It is barely warm which is a bit surprising to me because other passive cooled switches in our switches are much hotter than this one.

The procedure of setting the system up and running from opening the package to working system is very simple. The only rather often discussed issue is actually the same thing with all the network devices is the default IP address. 192.168.1.1 as default IP is not the best selection because it is very widely used as a firewall/gateway address of the system and therefore it needs to be changed separately outside of the normal network before installing it as a part of the network. If it would be like .250 it would not so often overlap with the present setup.

I have had the switch connected for several weeks now to a set of Hikvision and Dahua branded surveillance cameras and everything has worked well. In this setup there were not any problems with the cameras. Everything worked as they should without any hickups. In my setup there were no very long cable distances from switches to cameras and therefore I could not test max 250m or beyond signaling quality or power transfer in PoE+.

For testing purposes my setup consisted of 3pcs of Hikvision 4k and one Danua 1080p camera. I did not test SFP-slot of the device. Maybe I will later do that and add more to this device.

Special in this GS1350 series compared to other series is the 5 successive LEDs in the left side of the cables telling how much of the total PoE capacity is in the use. All five on means that capacity is maxed out. In my case there are 2 LEDs on. As in the previous picture seen current power usage with this setup is 15.1W/60.0W = about 25% of the capacity.

+ Power consumption indicators in the front

- Default GUI is a bit outdated and could be more innovative

- Default IP would be other

This is a really nice small and silent switch for professional surveillance systems. I like this. Unit is small.

If someone reading this review wants something more precise testing I may be able to do some further testing. This device is now set to permanent use in one of my systems and time will tell how it works in the long run as a core part of a surveillance system.